"Prophecy Fulfilled"--message prepared to give at White Oak UMC

I love snow!!  It was wonderful to wake up in my hometown to snow.  More and more snow came down as the morning continued.  I'll write more about that later.  I thought I'd share a message I wrote for today.  I had been asked to speak at a local church as a Lay Speaker for today, but because of inclement weather, the majority of local churches were cancelled for today.  Here is the message.

“PROPHECY FULFILLED”
White Oak United Methodist Church, Red Bank
December 26, 2010
Matthew 2:13-23 (New International Reader’s Version) [this version is based on the NIV, but has been adapted for easier reading and comprehension]
13 When the Wise Men had left, Joseph had a dream. In the dream an angel of the Lord appeared to him. "Get up!" the angel said. "Take the child and his mother and escape to Egypt. Stay there until I tell you to come back. Herod is going to search for the child. He wants to kill him."
14 Joseph got up. During the night, he left for Egypt with the child and his mother Mary. 15 They stayed there until King Herod died. So the words the Lord had spoken through the prophet came true. He had said, "I chose to bring my son out of Egypt."—(Hosea 11:1)
16 Herod realized that the Wise Men had tricked him. So he became very angry. He gave orders concerning Bethlehem and the area around it. All the boys two years old and under were to be killed. This agreed with the time when the Wise Men had seen the star.
17 In this way, the words the prophet Jeremiah spoke came true. He had said,

Small deeds can change the world.

"Small deeds can change the world." (Max Lucado, Cure for the Common Life: Living in Your Sweet Spot, 116)

You may have heard the expression "Pay It Forward" and you may have seen the movie of the same name.  The basic line is that someone does something kind for someone else, repaying someone else's kindness to them.

We can all do acts, deeds of kindness.  In the movie "Evan Almighty", they were referred to as "Acts of Random Kindness" or "ARK" for short.

What does it require of us?  Our willingness to use who we are and what we have.  It may take some time and energy as well.

In reading the chapter by Lucado, I learned several interesting stories.

1--Pilot Bohn Fawkes sustained hits on the tanks of his B-17 in World War II, but the plane did not explode.  When the technicians opened up the missiles, they found them empty except for one that contained a note written in Czech that said: "This is all we can do for you now."  It appears that the assembly-line worker disarmed the bombs, left many of them empty, and was able to get a note into at least one of them. (Lucado, 115) 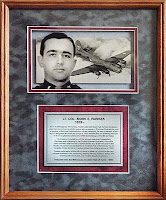 2--Operation Little Vittles was begun by another pilot in World War II, Gail Halvorsen.  It started when he handed gum to some children through a fence.  He began to drop gum to the kids and then gum and candy tied to handkerchief parachutes.  He told the children they would know it was him because he would wiggle his wings.  This earned him the nickname "Uncle Wiggly Wings". (Lucado, 111-112) [There has been a book written about this by Halvorsen himself: The Berlin Candy Bomber (2002)]

Will what I do create a ripple effect of small deeds being done one to another?  I don't know.  I don't have control over that. All that I know is that I must do whatever it is I can do.

I'm going to look for the small deed opportunities and do them.

PS-- In preparing to teach the Lucado chapter in the absence of the teacher, I found some other resources I'd like to add to my blog.

Second, a quote from a Spanish musician:

If you need resources to get you started on WHAT you can do, check out the website.  In addition, there are some books available with great ideas.  There are even websites and books geared toward kids to get kids into action.

Maybe you'll check out the website and post the acts/deeds of kindness that you do or that you observe.  Maybe you'll post them here on the comments.  Regardless, I hope you'll be motivated with some new ideas!

I started taekwondo one January several years back.   Master Hall offered a free month's training to parents or grandparents of current students.  I had been wanting to take classes and this was the perfect opportunity.

My daughter had started in the Cubs (affectionately known as "Cubby" or "Cubbies") program when she was about 4 years old.   I watched her learn and grow in her martial arts skills through the years.  When she started sparring, I would suggest things to her.  That is, until I reached green belt and learned it isn't so easy keeping all that together physically and mentally.

Last December I was at Senior Brown level and tested for the Red belt.  I earned it.

Somewhere along the way, I had started having lung issues when I sparred, especially at testing.  However, multitudes of tests showed that on paper, my lungs are fine.   I had also developed some shoulder issues, but I had kept on keeping on.  For that last testing, I plastered on about 3 icy hot pads to minimize pain.  That turned out to be my last testing for a while.

Doctor visits and x-rays showed inflammation in the shoulders, adhesive capsulitis (frozen shoulders).  I stopped taekwondo and went into physical therapy for 10 months.  Herniated discs in the neck popped up at some point and those were treated to relieve pain.

Though my shoulders are still "frozen" and I don't have full movement, I have gone back into taekwondo rather than have surgery on both shoulders.  I am limited in what I can do, but I can still do quite a bit.  One major limitation is sparring, however, as that would cause major damage if my arm were to get caught and jerked.  A new system (E-CAS [Elite Counter-Agression Skills]) in the ITA is coming at a perfect time for me.

Today, I was able to test for the senior red belt.  As it was the late testing day, my daughter and I tested together for the first time.  It was a special experience for me to be back at testing, to be able to do my form (albeit not as perfectly as I would like), and to test along with my daughter (who tested for 2nd degree level 3).

﻿
Waiting.  It's a part of my journey in many aspects of my life.  In the past few weeks, I have been able to come out of the taekwondo waiting cocoon and have been able to spread my wings once again.  They have strengthened.  I wasn't sure I would be able to learn my form in the time I had, about 6 weeks.   But, with the help of the instructors, a student manual loaned to me by a friend, some extra time and perseverance, today happened.

The next testing will be for the probationary black belt.  But it's not about the ranks.  It's about the journey.

My journey in taekwondo is as much a part of who I am as is my spiritual journey and my journeys with relationships.  There are times of waiting in each of these as well.

Right now in my spiritual journey, I'm in a time of waiting.  You might be too.  If you're looking toward Christmas and looking toward the arrival, the coming of Christ, then you're in a waiting period, a season of Advent.

I was challenged this past week: Where is God in my Advent season?  And, I realized that in the chaos of it all, I wasn't spending quiet time in anticipation or preparation.  So, I've taken some time to PAUSE, to STOP, so I can spend some time waiting.  Waiting in expectation.

Where are you experiencing "waits" in your journey?  How are you preparing for the arrival of Christ?

May your waiting moments for the Christ child be blessed and filled with joy and adoration.

May the waiting periods in your life strengthen you.

Psalm 33: 20-22 (NIV)
We wait in hope for the LORD;
he is our help and our shield.
In him our hearts rejoice,
for we trust in his holy name.
May your unfailing love be with us, LORD,
even as we put our hope in you.

PS-- If you'd like to read a book that deals with "waiting", I highly recommend Sue Monk Kidd's When the Heart Waits: Spiritual Direction for Life's Sacred Questions, HarperOne: 1990.

Dry spells.  Droughts.  Whatever you want to call them.

If we're talking about weather, we mean that we're not getting any precipitation, primarily rain.  And that means that the earth is dry, there is dust in the air, the plants need watering (though they are relying on their root system).

If we're talking about writing, we mean that there isn't anything coming down the creative pipes.  The thoughts aren't flowing.  Or, if they're flowing, they're not making it coherently to any written form.

If we're talking about spiritual life, we mean those times when there seems to be nothing happening of significance, possibly no growth or no outward signs at least.  The times in which we may feel distant from our relationship with God and/or others in the body of Christ.

We could mention other areas of life...  dry spells are a part of the normal cycle of life.  Without them, we wouldn't appreciate the "rains"-- the refreshing, flowing, life-giving, sustenance-- when they come.

How do we survive dry spells?  Like the trees and plants.  Our root systems.  If our roots are deep enough and strong enough, they will sustain us.  We will bring in nourishment through them.   Some root systems grow closer to the top and connect to one another.  This is a great example of community.

Whether you are experiencing a dry spell physically, vocationally, emotionally, or spiritually-- know that the rain will come.

Meanwhile, may your roots continue to drink deeply of the waters that flow underneath and may you be supported by the roots surrounding you.

Know that dry spells are normal on the journey.