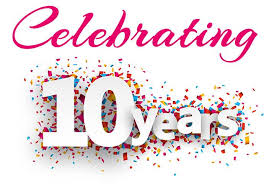 My blogging journey began10 years ago, in 2010.  That seems like forever ago.  In some ways it is.  In other ways, it is only the decade that it represents.

Much has happened in those 10 years.

Seminary graduation.  Becoming a pastor. Serving 3 churches in my first appointment.  Now serving 1 church in my second appointment (in my 2nd year there).

Learning about Wild Church Network and Bamboo Encounter being born as an alternative to indoor worship.

It has been a place to reflect for me.  It has been a spiritual practice.  It continues to be both of things.

For several years into the blogging journey, I kept up with the countries that checked out my blogposts, what the top 10 posts were for the year, and I would print each year to have a hard copy of my writing.  That's from the wanna-be writer in me, I suppose, the one who has been inside since about age 5.

For the past couple of years I've let go of keeping up with the countries, the top 10 posts, and printing a hard copy.  I'm still curious, but I haven't had the time.

I haven't written as much as I used to, even as a spiritual practice.

Things such as my high school senior finishing his final year and graduating took precedence.

Then there was the first year of college last year.

Spiritual practices can change over time, so it's not a negative thing that I've not written in a while.  There is only so much time and energy to go around.

Yet, I recognize that writing is still a spiritual practice for me.  It feels good.  Writing about things that allow for reflection are even better.

I picked up writing Haiku from one of the books I read this summer.  I've begun to write Haiku as a spiritual practice, putting them together with some of my photos.

There are things on my heart, mind, and soul that I have yet to write.  I hope time and energy allow for those.

Meanwhile, I recognize that September is when this all began, 10 years ago.

You can read the anniversary posts below.

Whether you've been with me on this adventurous journey the entire time or have just joined in to journey with me, thank you.  We do not travel alone.  I am grateful for your presence.

May the adventurous journey continue,