The end of September is almost here.

However, this year, I had more pressing writing obligations on my plate that were due on September 25th, my ordination paperwork.  I was able to mail and email them in on Friday, September 22nd, but I wasn't free to post my anniversary blog post just yet because there was work to catch up on (there always is) and other things.

Today, I'm taking some of my Sabbath rest time to do something I enjoy-- write. 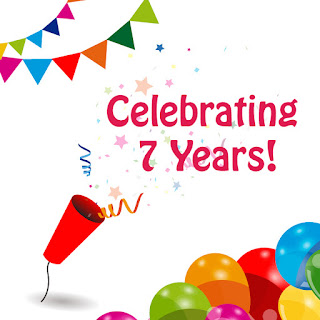 I starting blogging 7 years ago.  How has it been 7 years?  I have heard it said that time seems to go by faster as we age.  Maybe that's it.

I began blogging to deal with the spiritual "stuff" in my life.  I continue to blog for that reason.  Though I don't always have the time I would like to contemplate or reflect on the things that are going on in and around me, it is a good thing for me to write.  It has become a spiritual discipline.

For an anniversary blog post, I go back and write about the past year's statistics.

They aren't 100% accurate for the countries, because I am not always checking in to see who is reading, but it is at least a view into who has been reading.

Here are the statistics for this year:

The Top 10 Countries: (all time views)

The United States, Russia, and Germany continue to be in the top 3.  France and Ukraine keep their positions at #4 and #5, respectively.  China has moved up from #7 to #6 this year.  Belgium and the Philippines are  new this year on the top 10 list.

Here are the countries that I have noted reading the blog:  (Remember that I don't always check in to see who has been reading, so I many have missed several-- apologies!)

If the countries are listed with an ampersand (&), I count them as 1.  I count 54 different countries that are reading the blog.  Even if I've missed some over the year, that is still amazing and humbling.

Monthly Readership This Past Year:

The December 2016 and August 2017 spikes in readership are ones that I've not seen before and really don't know how to explain.  All I can attribute it to is that maybe there are things I'm sharing that relate to what other folks are experiencing and they are connecting somehow, someway.

In 2017 I have written 48 posts so far (this one makes 49). In 2016 wrote 62 posts.  In 2015 I wrote 47 posts. That was the year I was finishing up my seminary courses and focusing on graduation.  There was lots of other writing going on that year.   The year I wrote the most so far was 2013-- 130 posts.  Without going back to look, that must have been a combination of my final year in the 2 year Academy (lots of reflection) and things with seminary and life.

I continue to try to make space to write, even when life gets busy or my brain is tired.  Writing is often part of my quiet and study time.  It helps me process what is going on spiritually and otherwise in life.

Thanks for being with me on this adventurous journey.  When I started it, I had no idea I would be here 7 years later still writing.  But, I'm glad I am.

I look forward to continuing the journey with you and hope you will take some time to share your journey with me.

Blessings on your journey,